Using Epidemiology to Fight the Coronavirus Pandemic: Building the Ship while Sailing Itâ¦

The syllabus for this course is forthcoming...

Session 1: Deciphering the source of the first cases in Wuhan: A seafood market and pangolins

Session 2: What made SARS-CoV-2 such a serious pandemic?

Session 4: How to botch the Covid-19 response â Experiences of Italy, UK and USA

Session 3: Approaches to preventing the spread of SARS-CoV-2 - Experiences of China, South Korea and South Africa

The objectives for this course are forthcoming...

The reading for this course are forthcoming... 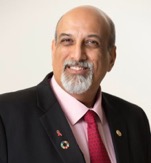 Salim Abdool Karim, MBCHB, PHD is a clinical infectious diseases epidemiologist who is widely recognized for his scientific contributions to HIV prevention and treatment. He is Director of the Centre for the AIDS Program of Research in South Africa (CAPRISA) and CAPRISA Professor of Global Health in Epidemiology at Columbia University. He has adjunct professorships at KwaZulu-Natal, Cornell and Harvard universities. His clinical research on TB-HIV treatment has shaped international guidelines on the clinical management of co-infected patients. He co-led the CAPRISA 004 tenofovir gel trial that provided proof-of-concept that antiretrovirals prevent sexually transmitted HIV infection. The finding was ranked among the “Top 10 Scientific Breakthroughs of 2010” by Science. This approach, using tenofovir containing pills, is currently promoted for HIV pre-exposure prophylaxis (PrEP) by UNAIDS and WHO. Dr Abdool Karim is ranked among the World’s most cited scientists by Web of Science. He serves on the Boards of several journals, including the New England Journal of Medicine, Lancet Global Health, Lancet HIV and mBio. He is the Chair of the UNAIDS Scientific Expert Panel, WHO’s HIV Strategic and Technical Advisory Committee as well as the WHO TB-HIV Task Force.  His many awards include Columbia University’s “Allan Rosenfield Alumni Award for Excellence” and the African Union’s “Kwame Nkrumah Award”, the most prestigious scientific award in Africa. He is a member of the US National Academy of Medicine, the American Academy of Microbiology and the Association of American Physicians. He is a Fellow of the Royal Society. 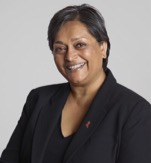 Quarraisha Abdool Karim, PhD is an infectious diseases epidemiologist who has focused for the past 30 years on HIV infection in adolescent girls and young women. She is a South African infectious diseases epidemiologist, who is Associate Scientific Director of CAPRISA.  She is a Professor in Clinical Epidemiology at the Mailman School of Public Health, Columbia University, USA. She is also a Professor in Public Health at the Nelson R Mandela School of Medicine and Pro Vice-Chancellor at the University of KwaZulu-Natal (UKZN) in South Africa. Her research has garnered several thousand citations, including her findings on tenofovir gel that have more than 2000 citations. She is an Editor of the 6th and 7th Editions of the Oxford University Textbook on Global Public Health, which is one of the most widely used textbooks used to teach public health throughout the world.  She is the co-editor of a book on HIV/AIDS in South Africa (Cambridge University Press), which is used as a reference text in South Africa and a book on HIV Clinical Trials (Springer). She is on the Editorial Board of AIDS and the Journal of the International AIDS Society. She is the UNAIDS Ambassador for Adolescents and HIV and co-chairs the UNAIDS Advisory Group to the Executive Director, member of the PEPFAR Scientific Advisory Board, the Icipe Governing Council, and the Editorial Board of AIDS and JIAS. She is a member of the US National Academy of Medicine and a Fellow of the Royal Society of South Africa, the Academy of Science of South Africa, the African Academy of Sciences, and The World Academy of Sciences (TWAS).

The Zoom link for this live webinar course will be made available to course registrants prior to the start of class.