Responding to an Active Shooter

Hear from USCPD what to do to keep your students and yourself safe. This seminar is designed to provide guidance on what to do in a shooting incident, how to be prepared, how to think safely and how to recognize a potential problem, specifically in campus and classroom contexts. 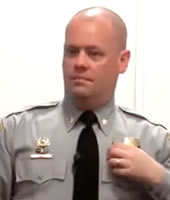 Major Irick “T.J.” Geary serves as the operations bureau commander with the USC Division of Law Enforcement and Safety. His current responsibilities include management and oversight of the division’s uniformed patrol, crime prevention, crime suppression and NAC operations. Major Geary is a graduate of the 251st session of the FBI National Academy, and holds Bachelor of Science and Master of Criminal Justice degrees from USC, as well as a graduate certificate in Criminal Justice Education from the University of Virginia. He was named the USC DLES Officer of the Year in 2007, and has received various awards and commendations.