The Botox Option: An Introduction to its Use for TMD

Some temporomandibular disorders are highly resistant to treatment: One patient has already broken three night guards, another patient cannot tolerate any night guard, and another has severe and intractable anxiety. For such cases, botulinum toxin injections may be beneficial.

This course will introduce you to judicious and responsible Botox treatment for temporomandibular disorders. First you will learn how to determine whether a muscular TMD is present, or another source of pain (articular TMD, primary headache, neuralgia, etc). As part of this, the examination of the jaw will be covered. Then, the decision-making process for Botox treatment, versus the various other options, will be explained.

The second half of the course will cover Botox specifically:

This course is designed for dentists, specialists, allied dental professionals and medical providers. 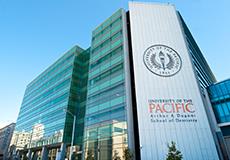 This activity is designated for 6 units of continuing education credit.

*Course includes lunch and coffee/tea service in the morning

Andrew Young, MSD, DDS studied Orofacial Pain at Rutgers University and the University of Medicine and Dentistry of New Jersey.  He is a Diplomate of the American Board of Orofacial Pain, and a Fellow of the American Academy of Orofacial Pain.  As the director of the orofacial pain curriculum and patient care at Arthur A. Dugoni School of Dentistry, he treats temporomandibular disorders and neuropathic pain.  He also leads the evidence-based decision-making curriculum.

Benjamin Shimel, DDS, earned his Bachelor of Science Degree in the Integral Program of Liberal Arts from Saint Mary’s College of California in 2002 and completed a post-baccalaureate program from San Francisco State University in 2009 before earning his Doctor of Dental Surgery degree from Dugoni School of Dentistry  in 2013. He completed Oral and Maxillofacial Surgery training at Dugoni School of Dentistry and Alameda Health System, Highland Hospital in 2017.

After completion of his residency program, Dr. Shimel joined the staff at Highland Hospital and University of the Pacific as an Assistant Professor and full-time Attending Surgeon and Assistant Professor. He remained in that position for approximately before departing to start private practice in San Ramon, California in late 2019.

Arthur A. Dugoni School of Dentistry